Strong VPN might not be as well known as some of the big VPNs, but that isn’t for lack of effort. Sure, it hasn’t got the most extensive global reach.

With over 950 servers in 34 countries, but it has good, well-designed apps for Windows, macOS, iOS and Android, a zero-logging policy and a generous attitude to simultaneous connections; you can have up to 12 devices hooked up at a time, where many VPNs stop at five. While it doesn’t have the extra security and privacy features of some other VPNs, it’s competitive in terms of price and speed. Is this enough to make it a powerful contender, or are there weaknesses that hold Strong VPN back?

Based in California, Strong VPN has been running since 2005, building its service on a reputation for privacy and good customer support. Since then, the service has expanded its network and refined its apps, supporting not just the main desktop and mobile operating systems, but Fire TV devices and router installations, along with Synology NAS units, Kodi media centres and Linux desktops if you’re happy to use the OpenVPN client instead of a specific app; clear tutorials are provided on the website.

Generally speaking, this VPN keeps things simple. There are no complex plans or tiers of service, no free options and no paid-for extras. If you’re looking for double-VPN, website blocking or complex obfuscation options, look elsewhere; Strong VPN is more focused on covering the basics, which it does really well.

Setup and basic use

Strong VPN scores high for ease-of-use right off the bat, thanks to simple steps like having an app download link right on the homepage rather than buried under several pages of marketing bumf – something so many VPNs seem to get wrong. Just sign-up, download the app, enter your credentials and you’re up and running, ready to connect.

By default, Strong VPN opts for its Best Available Location option, picking the fastest and least-congested VPN server in your home location, which in our case is the UK. Clicking on the location pops-out the usual location list, which you can sort by country or city, though there’s no indication of which locations might be best for streaming or privacy and – more importantly – no information whatsoever on ping times or potential speeds.

As we said, Strong VPN is relatively restricted as far as locations go, with just 34 countries covered at the time of writing. That said, the list includes seven different cities spread across the UK and 17 across the US and Canada, while there’s a decent spread across Western Europe, Australia, South America and a reasonable selection in Asia.

There’s nothing in the Indian subcontinent, however, or in Africa, so if you’re travelling and want a fast local connection in those regions, then you might need a different VPN.

Unusually, Strong VPN also defaults to the IKEv2 protocol, where most Windows VPN clients tend to go for OpenVPN with UDP. The latter is only a click in the Settings panel away, where you can also turn on a Scramble obfuscation option or switch to the older SSTP and L2TP protocols, should you have a need to. IKEv2 handles security differently to OpenVPN, but isn’t widely regarded as inferior – it tends to be the default option for most mobile VPN apps. All the same, it’s good to have the choice.

Other settings and features are minimal; you can set the app to run when Windows boots or connect and reconnect at launch, and there’s a kill switch that, when enabled, will break any live connections should your VPN fail. If you’re looking for something with a richer feature set, then look towards the likes of ExpressVPN or NordVPN.

Strong VPN is headquartered in the US, which is instantly going to ring some alarm bells for anyone worried about state surveillance. However, the company states that it’s a zero-logging VPN service, and that it only captures the bare minimum of personal information – just your email address and billing information.

This sounds great, and the company publishes lengthy policies covering privacy, copyright infringement notices and sharing of anonymised data with third-party service providers. While the policies emphasise the zero-logging policy, we’ve seen other companies claim the same while keeping logs for operational purposes.

However, a support request to Strong VPN revealed that the company keeps no logs on connections, disconnections or any customer activity. Ideally, we’d want to see an independent audit to confirm this. Until then, we’ll just have to take the Strong VPN team at their word.

Like most VPNs, Strong VPN uses a combination of TLS and AES-256-bit encryption to protect your data while in transit, while the Scramble option for the OpenVPN protocol is designed to add an extra layer of obfuscation, aimed at foiling deep packet inspection systems used by some regimes and streaming services to detect and block VPN usage.

Strong VPN is also currently beta-testing services with the new WireGuard VPN protocol. This aims to provide faster speeds while going lighter on RAM and CPU resources, at the same time delivering security equal to or better than existing VPN protocols. Kudos to Strong VPN for getting it up and running early, though you’ll need to install a different version of the Windows client if you want to jump onboard.

Strong VPN isn’t quite in the premier league of VPNs as far as speed goes, but it’s close. On the default UK connection we saw speeds drop by 7.3% on the download and 5.5% on the upload, while connections to servers in the Netherlands and Germany saw download speeds drop by 5.3% and 7.2%.

It’s good on US connections, though, with a drop of 34.6% on the download speed not being enough to spoil HD video streaming, and while the performance hit on VPN connections to Singapore or Australia was as devastating as you might expect, you could still get enough bandwidth to do most things online.

One thing it isn’t is leaky. Tests on DoILeak.com came up with nothing untoward, leaving no indication that our apparent IP address and location wasn’t identical to our real one. And there’s good news for UK-based Netflix viewers too; Strong VPN had no problems unblocking the US version, or streaming content from other US services like Comedy Central.

The news isn’t quite so good, though, for those wanting to access the BBC’s iPlayer while abroad. iPlayer threw up an ‘only available in the UK’ error message when we tried to connect through a UK VPN, whether using the IKEv2 protocol, OpenVPN or even OpenVPN plus the Scramble option.

Strong VPN’s mobile apps follow the general look and feel of the desktop client – always a good thing. The Android version provides a surprisingly close match on features, including the Scramble option though not the kill switch, and going one step further by offering Split Tunneling, so you can select which apps do and don’t connect through the VPN. Performance is excellent, too, and we actually had faster US connections than we achieved through the Windows client, even with repeat testing. 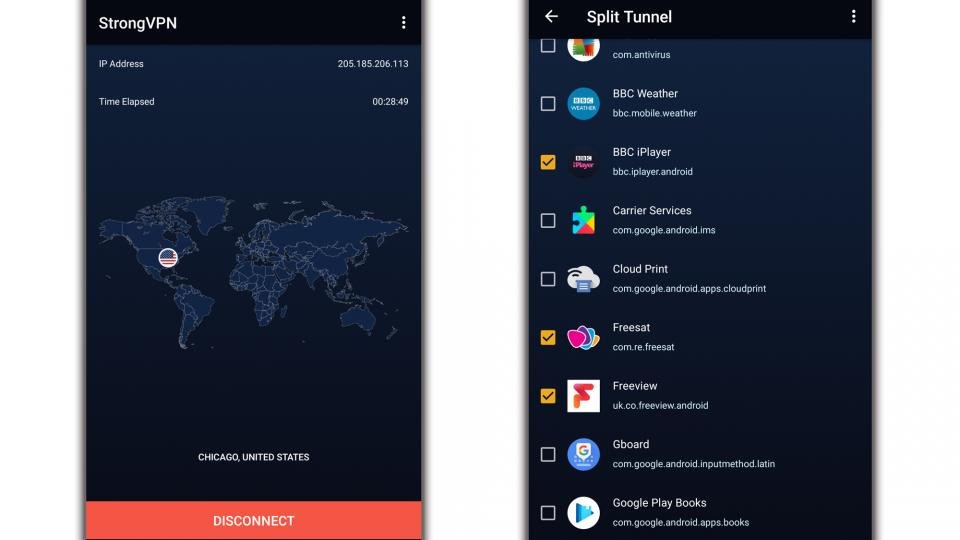 Disappointingly, the iOS version is more stripped back, with no Scramble or Split Tunneling, just a choice between IKEv2 and IPSec protocols. However, US connection speeds were actually even faster, sometimes reaching the speeds we’d expect from a close-hop VPN. This would usually make us smell a rat, but DoILeak.com reassured us that the server was – or appeared to be – based in the US, while US Netflix didn’t have any complaints about streaming.

Like we said before, Strong VPN keeps its plans and pricing simple, without some of the dafter high monthly rates and bargain-basement long-term discounts we’re seeing with some VPN providers. The service comes at a straight $10 (£7.7) a month or $70 (£54) for a year upfront. That’s competitive with leading VPNs like NordVPN, if not the cheapest VPNs like ZenMate or Proton VPN.

It’s hard not to be impressed with Strong VPN’s customer support. Email queries were answered within the hour with accurate and knowledgeable responses, while Live Chat had us talking within minutes to a support technician, who politely took us through selecting protocols and streaming Netflix. There’s also plenty of help to be found online, with tutorials to take you through all the basics plus more complex operations, like the aforementioned installation on routers or Fire TV sticks.

Strong VPN has its weaknesses. It doesn’t have the advanced features of some rival VPNs and can’t match them for global coverage, while there are smaller niggles like the lack of any performance indicators that leave you feeling that the software isn’t quite keeping up. Yet performance is good, customer support seems excellent and the privacy and security live up to the name. Most of all, it’s a really easy VPN to use. If it’s not quite up there with our top VPNs, it’s well-priced and worth adding to your shortlist.

Apple AirPods Pro Review: Ideal When On the Move