Their close-range connection speed is breathtaking, too, which was head and shoulders above any other mesh kit we've tested.

Unfortunately, the Tenda system relies on a single 867Mbits/sec connection for both client and backhaul duties, so connecting via one of the other nodes slows things down a bit. Overall download speeds are still likely to be far better than you can achieve from a single standalone router, but it's a fair way behind the best mesh Wi-Fi systems on the market.

The Nova MW6 has other foibles, too. Weirdly, with the current firmware there’s no way to bind an IP address to a specific device unless you also apply some sort of port forwarding rule to that client. Moreover, if you don’t like the default 192.168.5.x IP address range, you can change it – but only to either 10.0.0.x or 172.16.0.x. 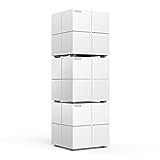 Tap around the app (no web interface present) and you will also notice a lack of band-splitting options, although to be fair I didn’t encounter any problems with my own devices connecting on the wrong band. There’s currently no IPv6 support either. The manufacturer says it intends to add this in a future update, but it would have been reassuring to have this important piece of future-proofing in place from the off.

What you do get is a simple guest network feature, which you can activate for four hours, eight hours or permanently. A group-based parental control function also lets you limit internet access to certain times of day for specified clients, although the Nova system doesn’t let you perform any sort of site-blocking.

It's also possible to schedule a daily or weekly reboot, although I'm in two minds about this feature. It feels like a good idea, but it suggests that Tenda lacks confidence in the stability of its own software.

The Tenda Nova MW6’s most tempting feature is its low price: while the BT Whole Home Wi-Fi kit costs a similar amount, it only functions as an extender.

If you’re looking for a mesh system that can completely replace an underperforming router, the Tenda is your most is a viable economic option. You will get a better feature set and stronger performance elsewhere.

Apple AirPods Pro Review: Ideal When On the Move