The Samsung Galaxy Book Ion is a product you know is special as soon as you prise it from its box. it’s incredibly light, yet robust and well made; it’s practically and sensibly thought out, too, and the screen is a stunner.

And, yet, Samsung has somehow managed to make it look different from the crowd as well. This is no MacBook Air clone, all clad in dull grey aluminium. The Samsung Galaxy Book Ion has its very own identity and it’s all the better for it.

The Samsung Galaxy Book Ion comes in two sizes – with either a 13.3in or a 15.6in screen (both non-touch) – and both sizes could reasonably be termed ultraportable, with the 13.3in model weighing under a kilogram and the 15.6in model tipping the scales at 1.26kg.

Whichever model you choose, you’re getting a 1,920 x 1,080-resolution QLED display, a healthy selection of ports and a clever reverse-charging touchpad, which can be used to charge your phone or other devices wirelessly. 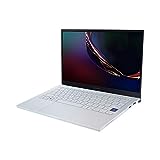 The angular body, the light weight and the way the Ion’s hinge lifts up the base at the rear to help with cooling reminds me a little of the old Sony VAIO Z laptops. The build quality is similar, too: first impressions are that it isn’t particularly substantial but that’s often the way with ultra-light laptops. There’s ultimately a trade-off between the luxury feel of, say, a MacBook Pro, and something that you barely notice is there when you stow it in a bag.

The 13.3in Samsung Galaxy Ion definitely falls into the latter category. It weighs just 970g, measures 12.9mm thick when closed and, thanks to 4mm bezels to the left and right of the screen and a 7mm bezel above it, it feels absolutely tiny.

Despite this, the Samsung Galaxy Ion is tough in all the right places. The base feels nice and solid to type on and, if you give the chassis a twist, it barely moves; there’s certainly no creaking or cracking to indicate poor build quality. The display backing is more flexible, but there’s no rippling in the LCD if you push your fingers hard on the rear of the lid. 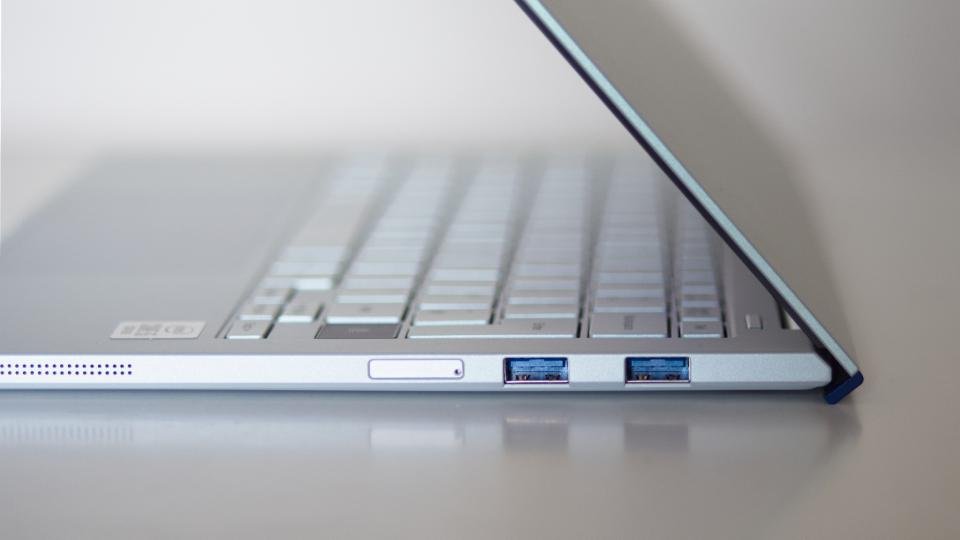 I rather like the way this machine looks, too. The Ion is available only in “Aura Silver”, which has an attractive, pearlescent sheen to it when the light falls on it. With a metallic blue strip running along the spine of the laptop it looks distinctly different from the rest of the ultraportable crowd.

Samsung hasn’t forgotten the practicalities, either. It might be slim but Samsung hasn’t been shy about including plenty of ports and sockets along the edges. On the left are a full-sized HDMI and Thunderbolt 3 USB C port, alongside a 3.5mm headset jack and DC charging port (the Ion can be charged via that USB-C port), while on the right edge is a pair of USB 3.2 Gen 1 Type-A ports and a microSD tray. 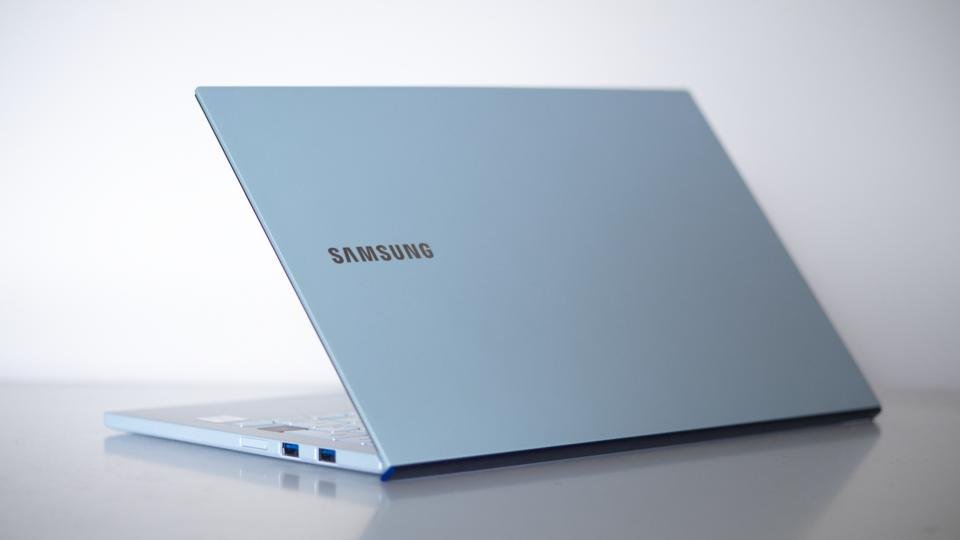 Interestingly, the latter also supports Samsung’s UFS memory cards, which are faster than regular SD cards, offering read and write speeds of up to 500MB/sec and 200MB/sec respectively. Alas, since these are hard to come by (you can’t even buy one from Samsung’s own UK website), it looks like you’ll be stuck using slower standard microSD cards.

However, there is a way to add more high-speed storage, if you don’t mind getting busy with a screwdriver. Inside the chassis, the Samsung Galaxy Book Ion has space to add both extra storage and RAM. You only get one slot for each, but even having enough space for that is something you don’t often see in ultraportable laptops.

Typing on the Galaxy Book Ion is a largely comfortable experience, although it doesn’t have the best keyboard in the world. The keys – while large and easy to touch-type on without too many typos – don’t have a particularly well-damped feel and there isn’t much travel to them either. 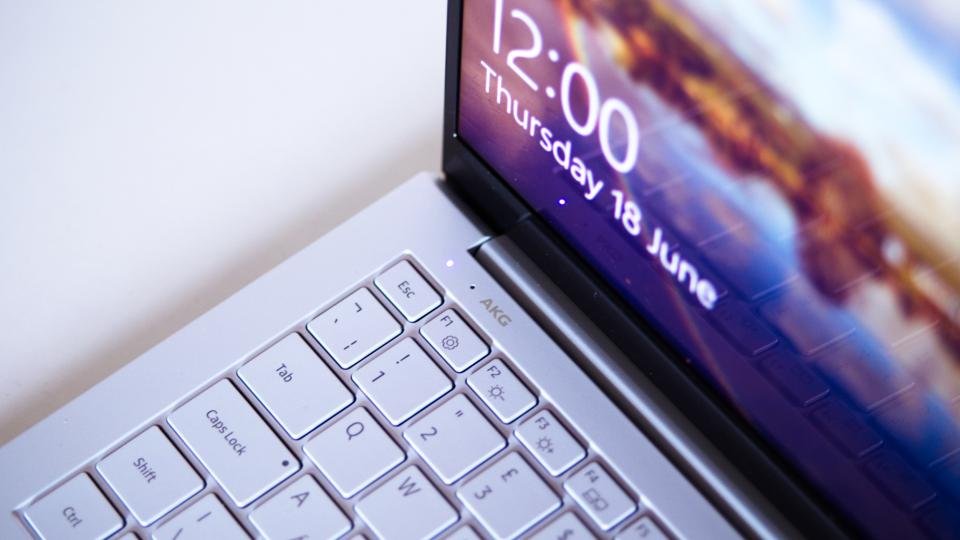 The layout, too, is imperfect. I like the fact that the UK model has a double-height Enter key and the cursor, Backspace and Delete keys are in the right places and a good size, too. However, the fingerprint reader is placed, awkwardly, just to the right of the right Shift key, shrinking it and crowding it over to the left, which meant I frequently ended up tapping it instead of Shift.

It’s a similar story with the touchpad, which is okay but not brilliant. I like the smooth glass top and the fact that it’s super wide. However, the built-in click action doesn’t feel particularly nice under the finger. Again it feels a little insubstantial, although I didn’t have any issues with accuracy or reliability, so your mileage may vary. 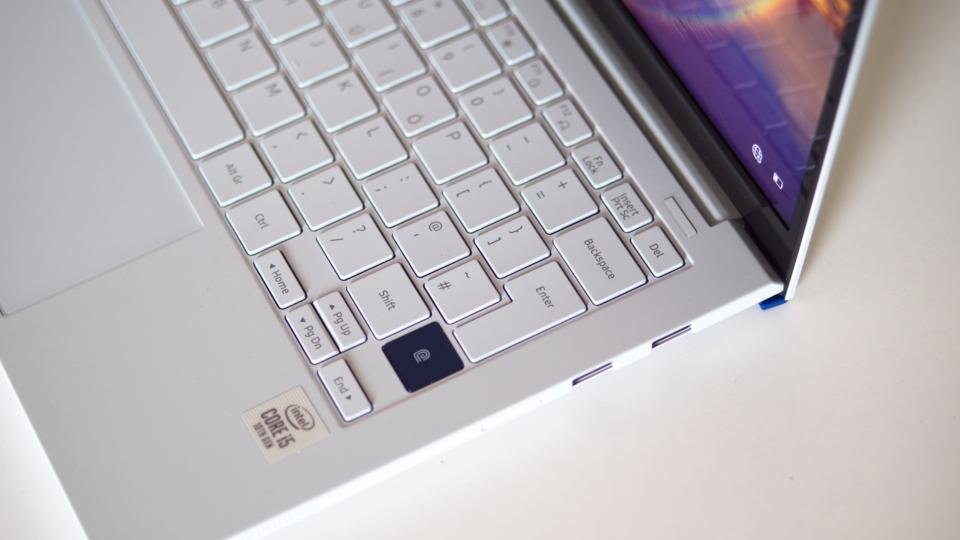 And you might be prepared to forgive the keyboard and touchpad’s minor foibles once you lay eyes on that glorious QLED display. On this, the smaller model, it measures 13.3in across the diagonal and the resolution is 1,920 x 1,080, giving an aspect ratio of 16:9. I must say I prefer the taller aspect ratio of the Surface Laptop 3 and Dell XPS 13.

However, the brightness and colour performance are like nothing else I’ve seen on a laptop. This is a stunning display, capable of rubbing shoulders with the very best Apple has to offer. 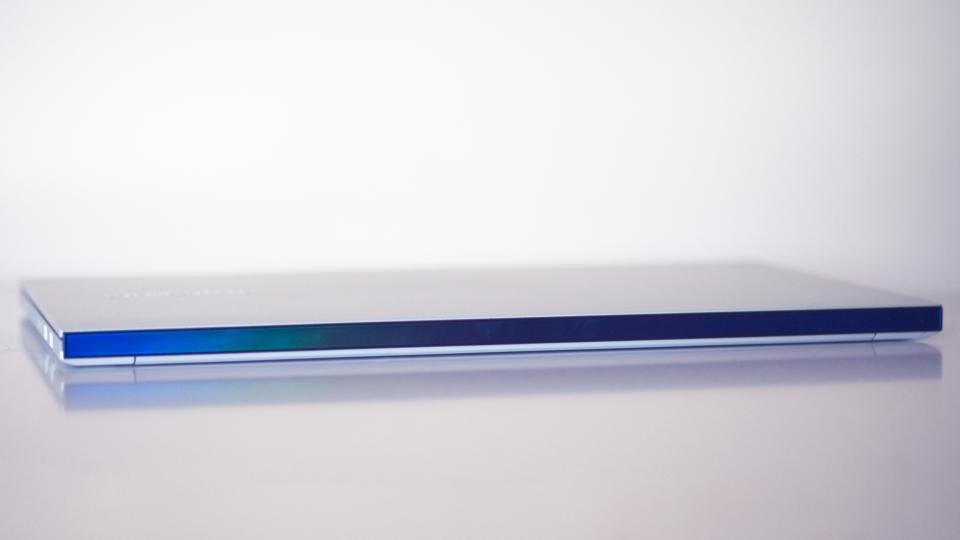 First up, outdoor mode, which is not something I’ve seen before on a laptop. Hit Fn+F10 and the display gains a significant boost to brightness, allowing you to continue working even in the brightest of outdoor sun. Indeed, peaking at an incredible 791cd/m2, this is the brightest laptop display I’ve ever seen; it even goes brighter than most smartphone displays.

Colours, too, are sumptuous. The display has been factory-calibrated to the sRGB colour space, although colour accuracy is pretty good rather than exceptional, with an average Delta E of 2.64 (I’d prefer to have seen between 1 and 2). But this is no ordinary laptop display: not only is it calibrated to sRGB, it’s also capable of reproducing the full Adobe RGB (99%) and DCI-P3 colour spaces (101.8%).

It’s worth noting the internal fans do whir away constantly when the laptop is plugged in unless you engage Samsung’s special Silent mode. Other than this, though, the performance of the Ion is as you might expect – on a par with other current-generation Core i5 machines and slower than rivals equipped with a Core i7:

The laptop’s SSD is a speed demon, however, lending everything you do an extra zip. Taking into account both read and write speeds (2,508MB/sec and 2,148MB/sec), it’s the fastest SSD I’ve seen in an ultraportable, bar none:

Perhaps the most impressive aspect of the Galaxy Book Ion’s performance, however, is its battery life. In our tests, where we set the display to a fairly bright 170cd/m2 and engage flight mode, then play a video full screen until the battery dies, the Ion lasted for 13hrs 3mins. That’s the longest battery life I’ve seen from any Intel-based Windows 10 laptop in recent years; only the Qualcomm Snapdragon 8cx-based Samsung Galaxy Book S and Google Pixelbook Go are better.

There are so many things to love about the Samsung Galaxy Book Ion that the one or two little foibles don’t spoil things. It’s fast and responsive. It’s very light and thin. And, unlike so many other ultraportables, there are loads of ports to play with; you can even expand the storage by adding a second SSD internally.

Combined with a stunning display, battery life that just won’t quit and a price that’s really rather reasonable, it all goes together to produce an ultraportable laptop of rare quality. Welcome back to the world of Windows laptops, Samsung; you’ve been sorely missed.

ExpressVPN 2020 Review: One of the best

iOttie Wireless Car Charger Review: A must have for business trips